Death of a Speedo

Even a long decline towards the inevitable can shock with its finality.

Why would anyone rent a modern, reliable, feature-laden car for a three month holiday in New Zealand when they could instead own a piece of automotive history? Why do people drink champagne and watch classic movies at home when they could be sticking hot coals in their eyes and pulling out all their fingernails with pliers?

Things began well for Mini and me.

Despite her 38 year age, the tiny green machine was full of life, running strongly and displaying superb handling on her maiden voyage from Rotorua to places southward. Over the long and windy roads, there was little that could catch her on the twisties, while on the flat, she could easily overtake slowbies at 120+ kilometres an hour. Despite this athletic ability for sustained high speed pursuits,  ventures over 100 km/h were rare, both to keep police interaction to a minimum and to allow me to hear myself thinking. Primarily so that I could detect when I was.

Things appeared similarly normal in the instrumentation department; with temperature, oil pressure and fuel gauges all reading properly and the large central speedometer accurately displaying the rate of progress, if not progress itself: for based my observations, the odometer could well have been stuck at 97,999.9 kilometres for some time...

The first indication of a possible Speedometeritis affliction came while heading in a southerly direction near Bulls. While travelling over the 90 km/h mark, the needle began to sporadically flutter either side the real speed, beginning  with a subtle flickering 5 km plus or minus the current velocity, then later up to 10, then 20 and eventually up to its stop at 140 km/h before settling down again with the barely audible sound of a scraping spring. One hundred and forty Ks in the green brick. Ha. Delusions of grandeur perhaps. Perhaps this is British Leyland's take on a heads-up-display of advanced statistical algorithms: your speed is likely to be within the range of 92 to107 km/h with a probability of 95%, mean of 100 and a T score of a quarter of a tank until empty.

This would happen a couple of times an hour but by the time Mini and Me boarded the 2am overnight ferry at Wellington, the flickering had calmed down completely and there things seemed destined to lie.

A few weeks later when my better half was over, the little green monster was generally well behaved with only the occasional embarrassing flutter around the dial to remind us of my folly. For the next month or two, Mini and Me lived like this, with the gremlins returning periodically to taunt me and eventually drive me off these fair shores.

And there the story paused for a while.

Upon returning to NZ a few months later, I hauled the Mini out of the garage and fired her up. All seemed well so it was up to Christchurch for an oil change at the cleverly named 'Oil Changers', where on three previous visits they had a laugh over having to replace the wee window sticker each time with an identical one reminding me that my next oil change would occur if the odometer ever reached 102,999.

But this time things were different and nobody was laughing... because that counter, which had for the last six months read 97,999.9 without fail, now mysteriously displayed 87,999.9, or, for those with less well-developed arithmetic abilities: exactly 10 thousand Ks less than the previous reading.

Hmmmm. I had visions of the young son of Mum's neighbour - who is a bit of a Mini enthusiast and fires the car up every few weeks for a spin when I'm away to keep the battery charged - doing a Ferris Bueller and perhaps overdoing it.

Anyway... while heading north to Wellington a few days later later, the spasms of wild speedo needle flailing became more frequent as the mechanical spectre developed the ability to randomly strike at any speed above 50 Ks. Signs that the dementia was plumbing more serious depths were also becoming more audible, as the formerly benign scratchy springy noise had by now developed into a demonic screeching from the gauge that sounded like a cross between a frantically ringing alarm bell, nails being scratched across a chalkboard and Shane McGowan from The Pogues.

Mini, Me, and Shane. And it was getting harder to get a word in edgeways.

For the entire next day in windy Wellington, the satanic ghouls took up permanent residence in the dial, and their shrieking become a constant fixture at any speed above simmering. All the way from Wellington to the Hutt Valley, my passenger and I had to resort to yelling our conversation across the cabin over the top of this frenzied mechanized wailing. In addition to this sonic imposition upon conversational flow, the squealing had the unsettling effect of masking other noises, the detection of which is of course a key part of the - well actually, it is the entire - Mini monitoring and diagnostics system.

But the next day, the apparition had calmed down a little and the noisier spirits were temporarily exorcised or at least a little quieter, probably because they were sporting wicked hangovers from a night spent clubbing 'til the small hours in Wellington's Courtney Place Debauchery District.

During the next phase of the trip down to the West Coast via Nelson, the center face of the speedo unit, a black disc with MPH readings printed on it, began to warble disconcertingly until it eventually popped free and began to slowly spin on the needle's spindle. In a pathetic attempt at egotistical self gratification, the Mini eggs the Speedo on, in the style of the-mountain-coming-to-Mohammed: "if I can't make the needle spin up to 100 mph, then you can damn well move those numbers around for me..."

Things deteriorated quickly towards the end.

On the way back from the West Coast, with the odo now reading 79,999.9, the playful frolicking of the needle with its periodic athletic lapping of the dial came to an abrupt halt east of Cass when the white pointer fell off its silver centre hub and lay exhausted and lifeless at the bottom of the glass, while the hub continued its literally pointless efforts to display velocity in between rattley spasms. Shortly afterwards, in a new twist on reincarnation, the odometer came back from the dead and, bursting with the needle's former life, began to intermittently count off the tenths after years of being frozen in distance.

The end came abruptly over a horrific few minutes the next day on July the 15th 2008 on a last trip from Waimate to Christchurch, during which the centre black face fell off completely, taking the silver center hub plummeting to the bottom of the unit with it. Free of this constraint, the gyrating zombie odometer dials then came fully alive in a three-dimensional Telethonesque horror show: spinning  with random wildness before bursting free of their moorings and finally toppling away in a dramatic self-disembowelment.

I had to look away.

Rest in peace, my howling friend. Mini and Me miss your antics.

*** WARNING: A graphic image follows, viewers with children are asked to use discretion *** 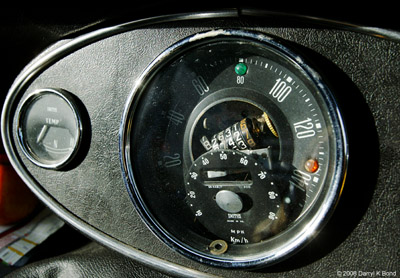 No officer, I don't actually know how fast I was going back there